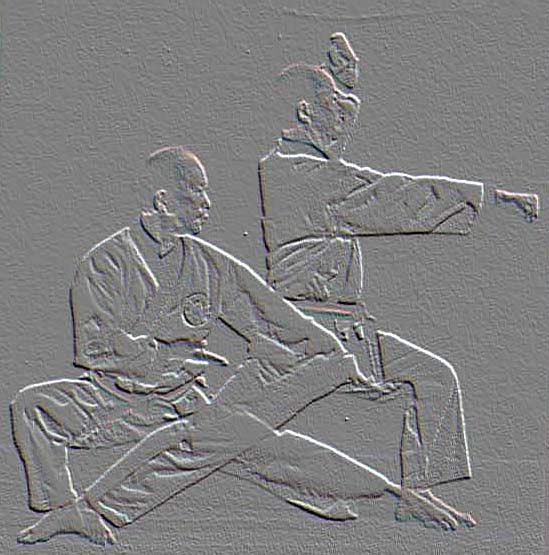 Effective immediately, the Puerto Rican Soo Bahk Do Moo Duk Kwan Federation, Inc. is now officially a member of the World Moo Duk Kwan Soo Bahk Do, affiliated with the Korean Soo Bahk Do Moo Duk Kwan.  Under the guidance and direction of Grand Master Hwang Kee, Founder and President of the Moo Duk Kwan.
Current President of the Puerto Rican Soo Bahk Do Moo Duk Kwan, Federation, Sa Bom Nim Pedro Vangas Jr., announced receiving the official charter from Grand Master Hwang Kee.  "We began construction of our future headquarters in the back of our house in the town of  Manati.  We hope to send pictures of the ground breaking ceremony involving Kyo Sa Nim Jaime Lazu and all our Moo Duk Kwan members.  This is our years' project and we hope to have it ready in time for another visit by Sa Bom Nim H.C. Hwang, hopefully later this year.  I am in the middle of planning a trip to Aruba, where we have had very loyal Moo Duk Kwan practitioners who hopefully will join the ranks of the World Moo Duk Kwan.  Our next step will be Costa Rica which I plan to visit before June 98."

Master Vangas' recent trip to the Republic of Panama was a  very real flashback to more turbulent, but memorable times.  As a former military intelligence officer during "Operation Just Cause", Master Vangas has developed many close friends in Panama.  Master Vangas was very instrumental in pre and post operations for the U.S. Military for "Operation Just Cause".  I can attest to his significant contributions, since I know he "saved" our butts many, many times.  "Gracias, Sa Bom Nim".  Panama is where I met Sa Bom Nim Vangas, and his wonderful family.  He was instructing Tang Soo Do Moo Duk Kwan to military personnel, their dependents, and to the local citizens.

Many of you may not be aware that the Moo Duk Kwan in Panama has been in existence since the 1970s.  First under the guidance of Mr. Prospero M. Ellis, Dan Bon 12949 and then under Sa Bom Nim Vangas, Dan Bon 15552.  It was in 1971, that Mr. Ellis invited Sa Bom Nim Chun Sik Kim to Panama. During the visit, a clinic and demonstration of Tang Soo Do (Soo Bahk Do) left a lasting impression on Master Vangas, and he was offered membership in the Korean Tang Soo Do Moo Duk Kwan.  After certification, Master Vangas, who was then a master instructor in Ji Do Kwon, started training and teaching Tang Soo Do (Soo Bahk Do).

When Mr. Ellis arrived in Panama, he was already discharge from the Air Force.  He left after becoming a Panama Canal Zone Policeman.  When the Canal Zone Police closed shop, he moved to Florida and joined U.S. Customs at the Miami International Airport; the Moo Duk Kwan members in Panama continued training. Since Mr. Ellis lost contact with the Panama Moo Duk Kwan, Master Vangas was forced to seek affiliation with the President of the American Tang Soo Do Moo Duk Kwan, Master Jae Joon Kim, Dan Bon 38. Master Vangas stayed on to train Moo Duk Kwan members until the mid-1990s.

Having retired (Master Vangas) from military civilian service, he moved his family to Puerto Rico, and settled in the township of Manati.  Since my departure in 1989, during "Operation Just Cause", Master Vangas has insisted on getting back to his "roots".  The rest as they say... is history.   Even after my departure from Panama, Master Vangas and myself continued to remain in contact, even while I was away in Southwest Asia, during Desert Shield and Desert Storm.  If fact, I tried to link Master Vangas with the U.S. Federation, even while I was trying to recertify as a dan under the U.S. Federation.   Click here to see correspondence I received from federation headquarters.  It took a while, but we succeeded!

Needless to say, Sa Bom Nim Vangas is on a very busy track in reorganizing the PR Soo Bahk Do, and bringing the message of Mission 2000 to Latin America.

Congratulations, Puerto Rico, and welcome back!  Also congratulations are in order, for Kyo Sa Nim Richard Morales on his successful advancement to Sam Dan!  A well deserved advancement in your Soo Bahk Do Moo Duk Kwan journey.

Hopefully we will be hearing wonderful news about Panama, Costa Rica, and Aruba!  On the road for "Mission 2000"!   soo bahk!

Back to the main index page, click on the logo above.